A beautiful Wintery tart with sweet persimmons, a touch of spiced rum, and almond frangipane filling (though you could use just about any in-season fruit). A quick buckwheat and almond gluten-free press-in crust makes this easy to whip up, no chilling required.

So I’m going to try a new thing this week, where I share the recipe near the top of the post, then finish with the photos and any extra writing. I just know that personally when I want a recipe, I just want the goddamn recipe. Sure the photos are beautiful to look at, and I love reading personal stories etc., but I generally don’t want to scroll for five hundred years to get to what I’m actually after – the recipe.

So, recipe first, then it’s your choice whether to read on or not. What are your thoughts on this? Do you love long posts? Or are you in the hurryupandshowmetherecipe bandwagon? 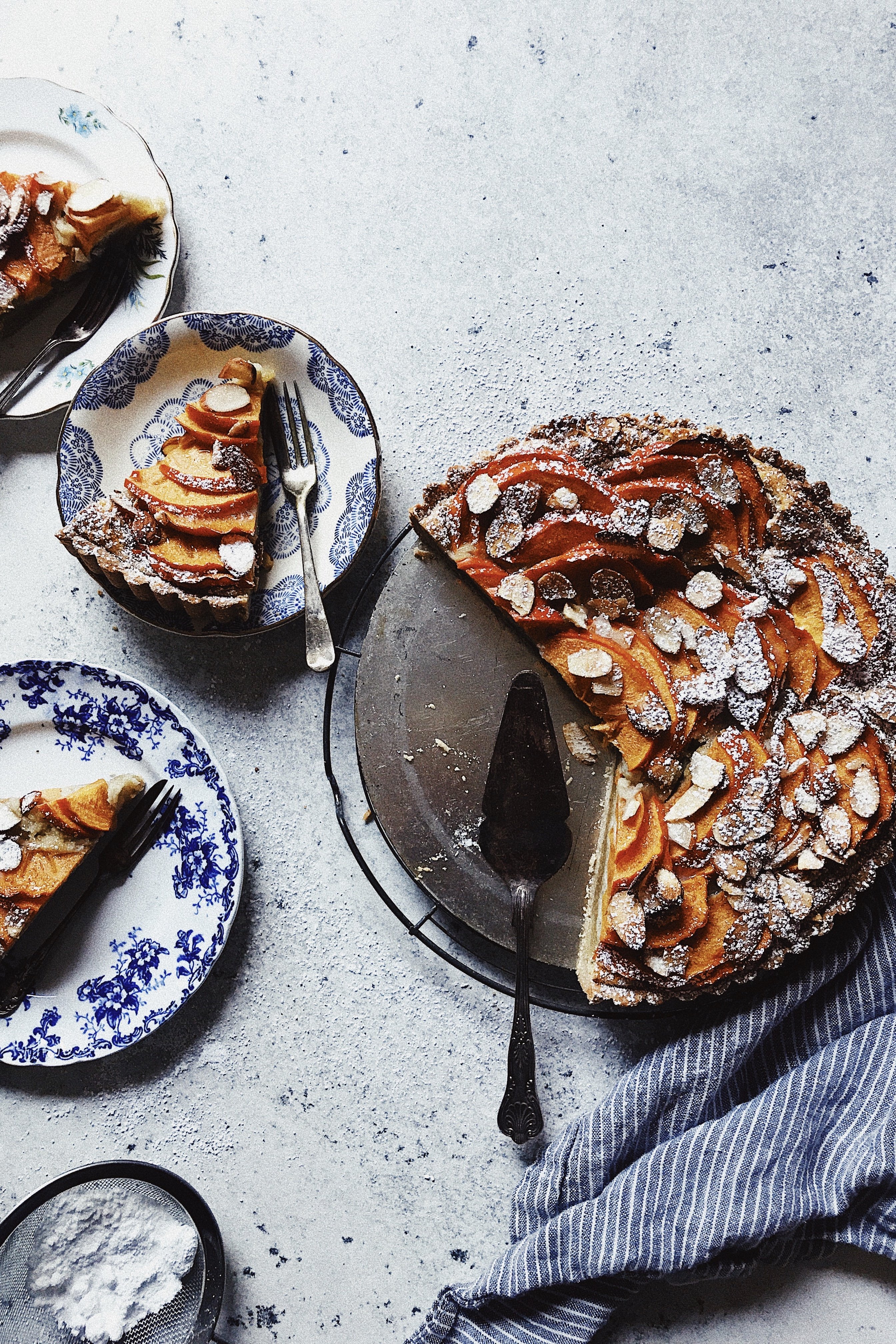 vegan, egg-free, dairy-free, gluten-free, soy-free Crust adapted from Evergreen Kitchen. Filling adapted from Lazy Cat Kitchen. A beautiful Wintery tart with sweet persimmons, a touch of spiced rum, and almond frangipane filling (though you could use just about any in-season fruit). A quick buckwheat and almond gluten‐free press‐in crust makes this easy to whip up, no chilling required.
Servings 8 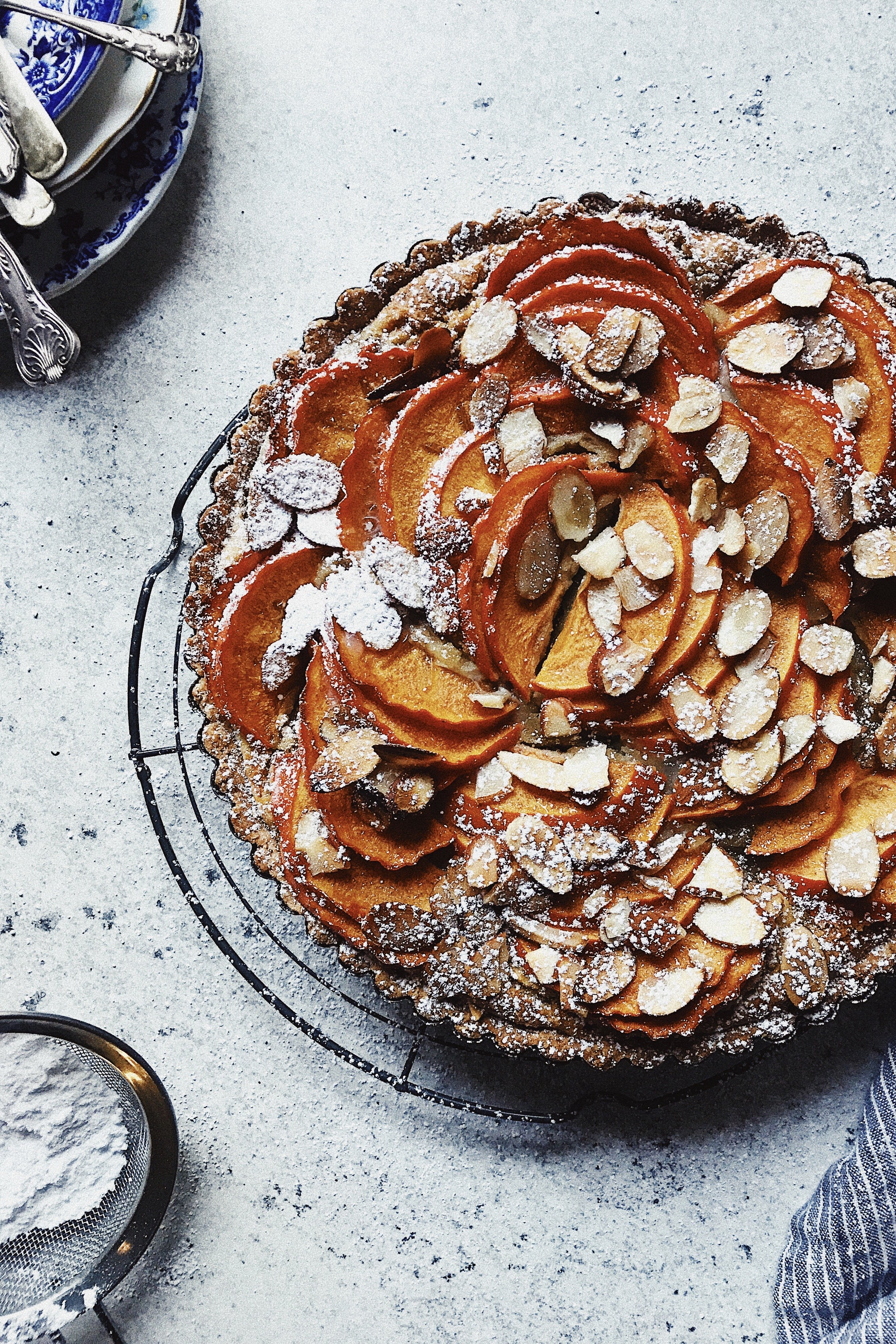 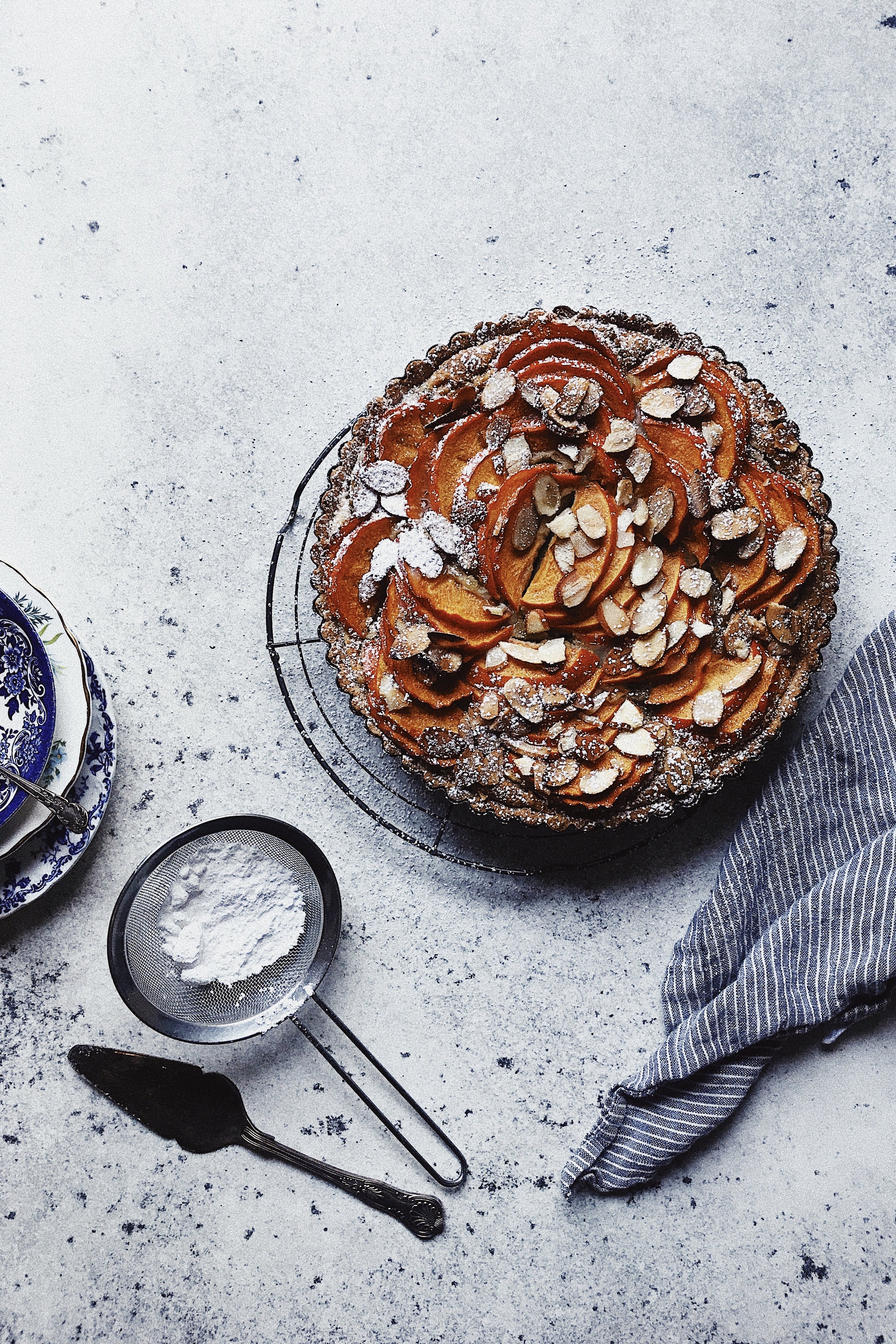 This tart is a beauty. It’s so easy to whip up thanks to the press-in crust, which by the way is delicious. ‘Buttery’ and crumbly (but not too crumbly that it falls apart, it’s sturdy), and with a nice nutty flavour from the buckwheat/almond combo. I plan on using this pastry for everything. I don’t think I’ll bother with regular shortcrust anymore, this one is everything I want, and it’s stress-free and quick.

Then the frangipane filling made with aquafaba, with the spiced rum addition, is simple but feels elegant. It complements the persimmons oh so well, with their sweet-spiced flavour. But almost any fruit would work wonderfully: apples, rhubarb, peaches, nectarines, berries, pears, plums etc. etc. Just change up the flavour to suit the fruit. For instance, you might leave out the rum but add more vanilla. Or you might add some herbs or lavender to the frangipane. Or use pistachio meal instead of almond. Or you could use a different alcohol to suit, maybe amaretto or cognac. Or just keep it simple. It’s up to you.

If using persimmons, keep in mind that you are after the non-astringent type. The most common type I’ve seen around these parts is called a Fuyu persimmon. They’re firm-ish when ripe, and so can be sliced and cooked like an apple. The astringent variety has to be completely soft and smooshy to be eaten, otherwise, they are… astringent. Bitter. You will not want to slice them and bake them in a tart. Trust. Most often the ones you will see for sale are the non-astringent variety, so you needn’t worry too much. 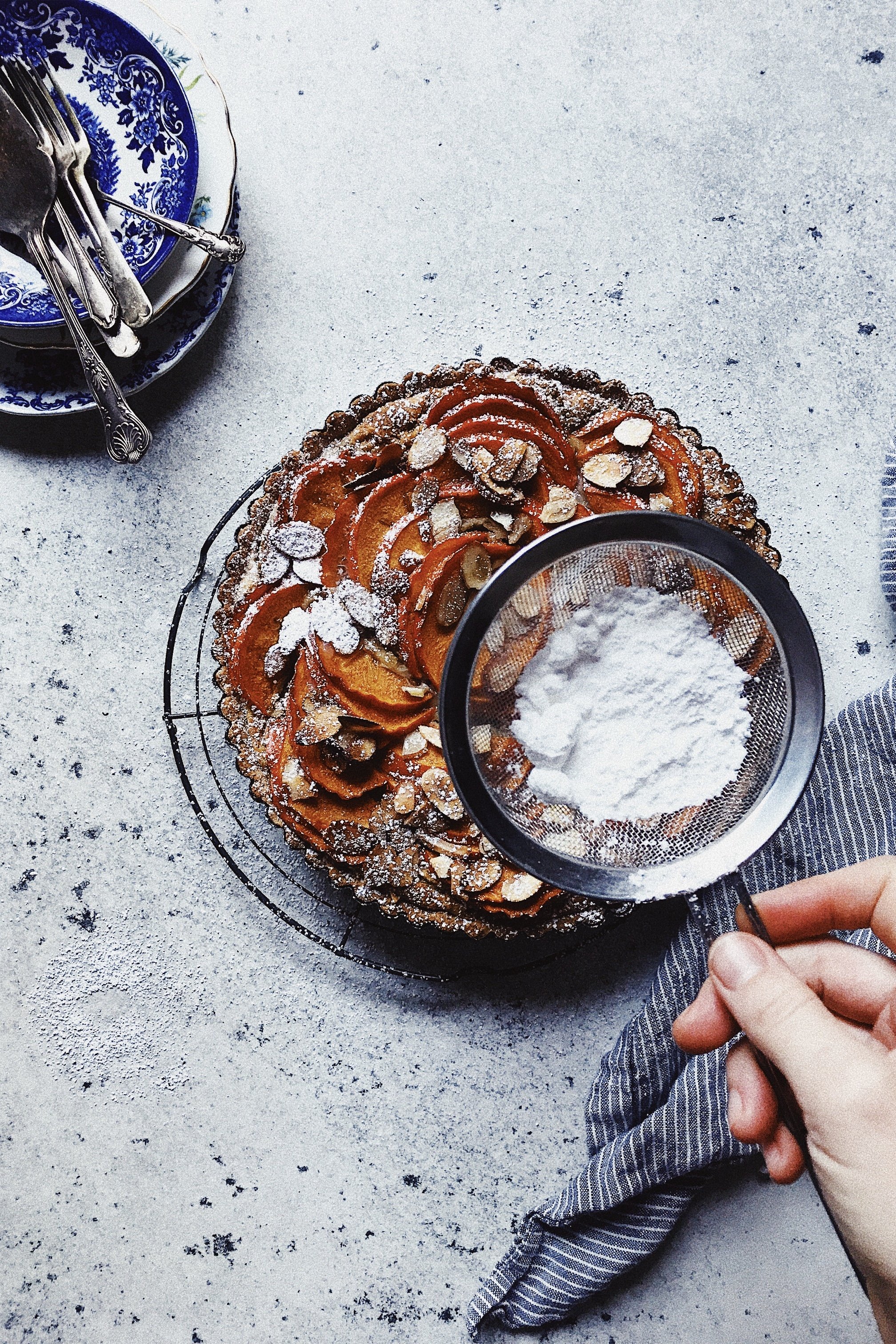 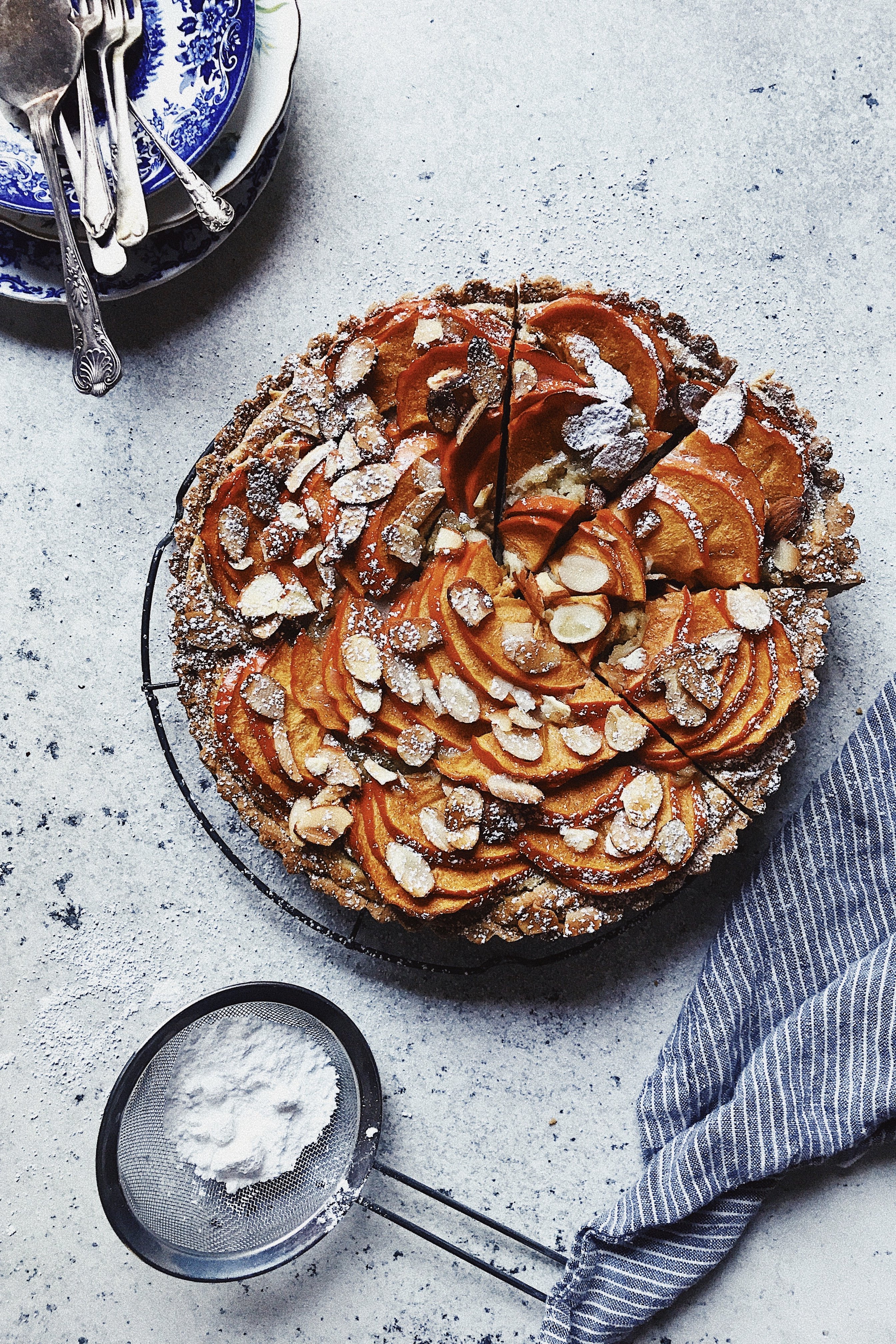 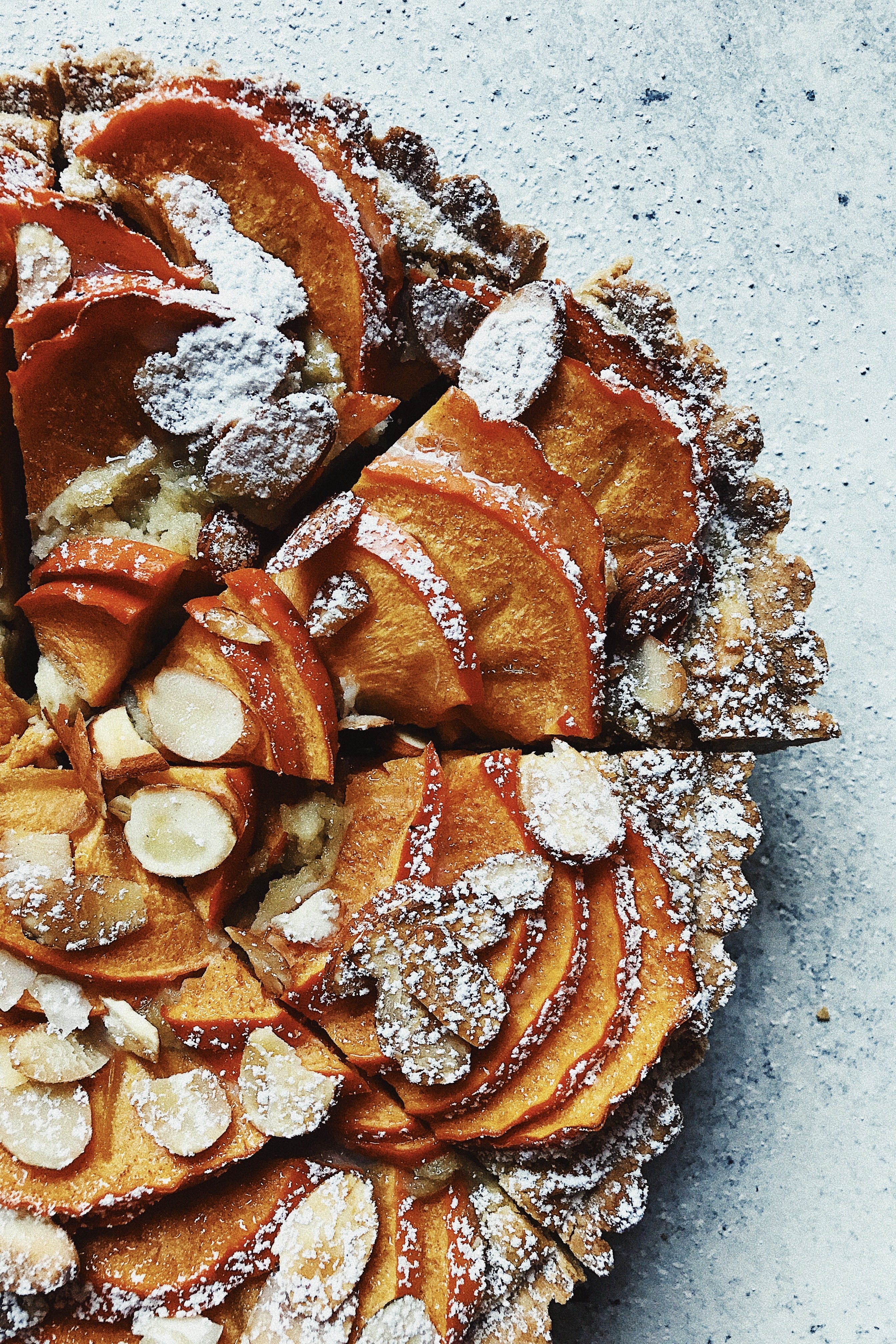 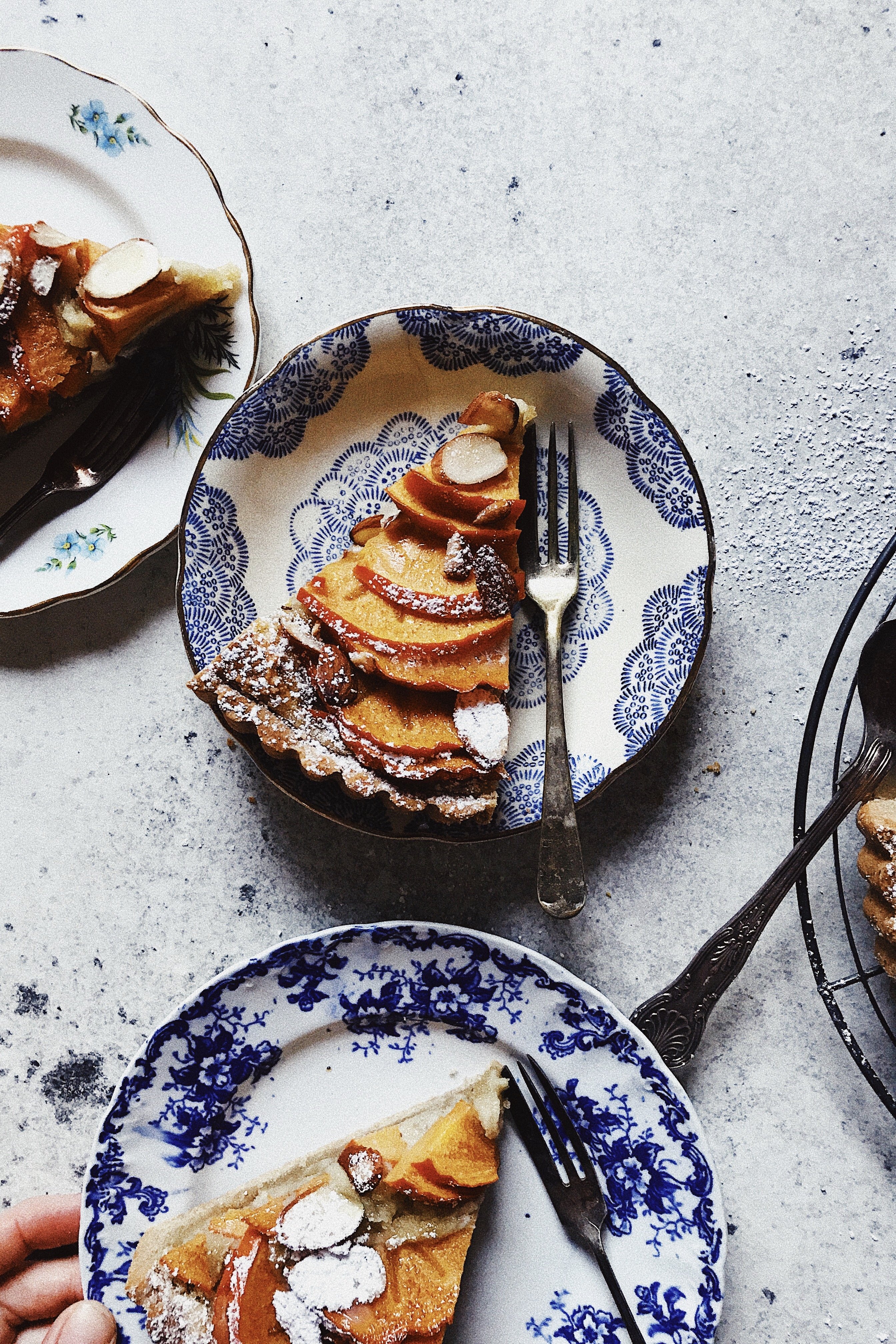 I hope you love the tart if you give it a go, let me know your thoughts. I realllllllly want to make croissants and then use this frangipane filling to make almond croissants. Croissants aux amandes are one of my Achilles​ heels, along with doughnuts. I almost caved and ate a non-vegan version recently, I was missing them that badly. So I need to give them a go myself. I want to do it NOW… maybe I will.

Have a lovely week! 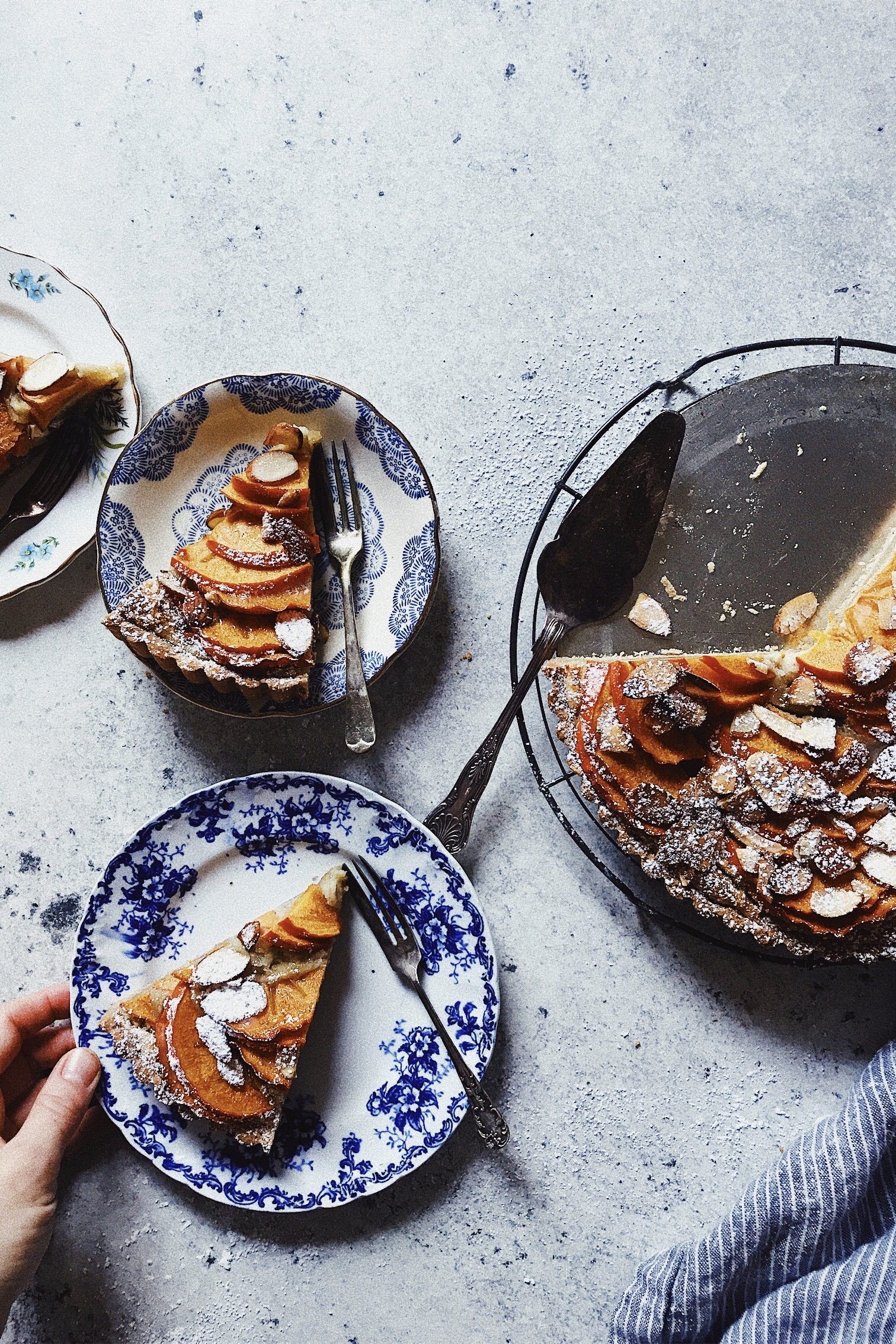 Other Posts You May Enjoy

This site uses Akismet to reduce spam. Learn how your comment data is processed.

Welcome to vegan carb-land. If you don't like pasta, you're probably in the wrong place.

Get My Rawish Cakes Ebook! 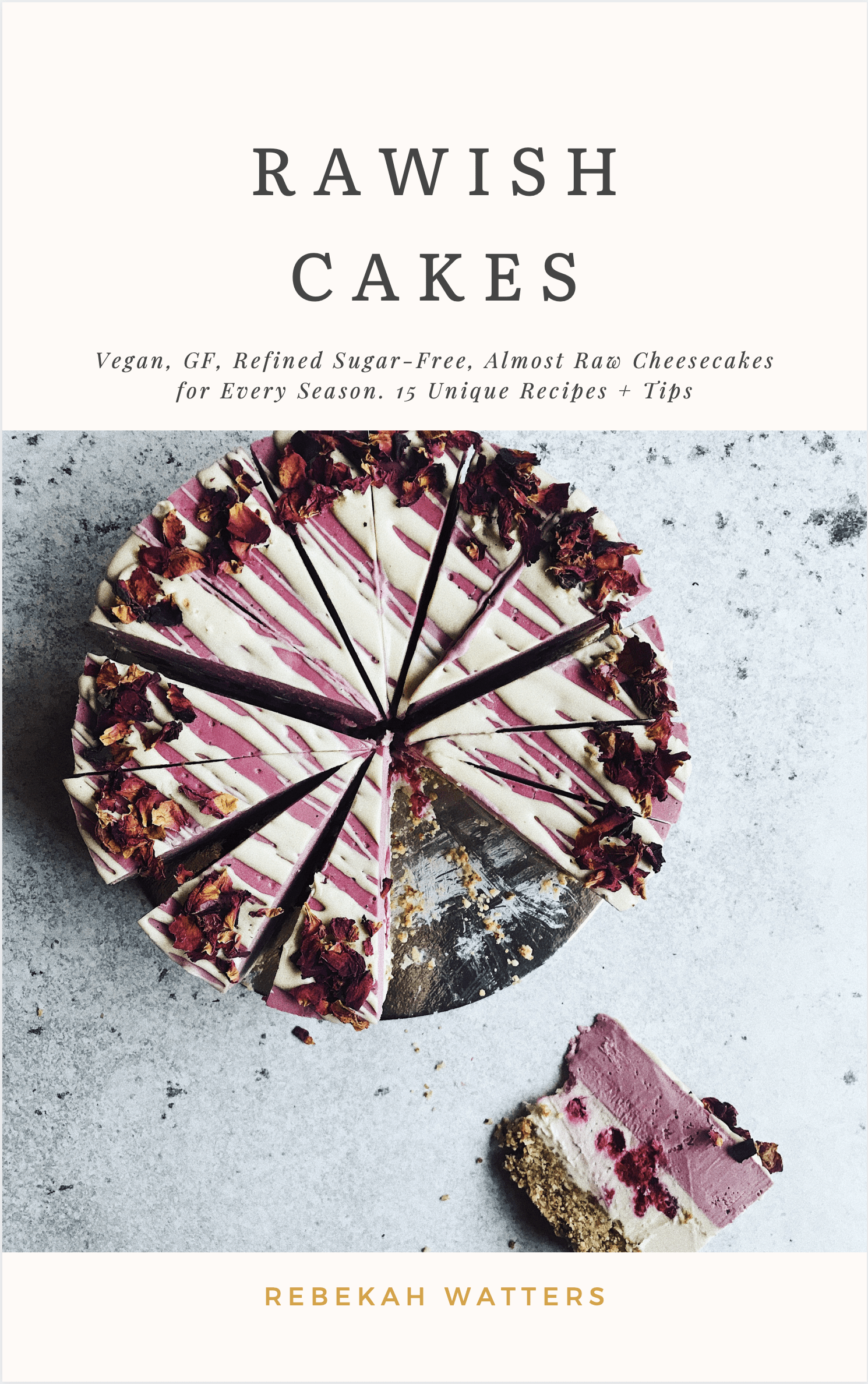